In response to the announcement this morning by the Holy See of the death of His Holiness Benedict XVI, Archbishop Noel Treanor has issued the following statement:

“Together with the laity, religious, and clergy across the Diocese of Down and Connor, I am saddened to learn of the death of Pope Emeritus Benedict XVI.

Prior to his papal election, Pope Benedict was renowned as an accomplished and respected theologian. A gifted teacher and prolific academic theologian, he was appointed as Professor of theology in 1958, aged only 31. He exhibited a particular capacity to make difficult theological concepts accessible to his students and readers, a teaching charism that accounts for the popularity of his writings about Jesus, Christianity and faith. Having worked in several German universities, this young professor played a significant role as a theological advisor during the Second Vatican Council (1962-1965). In 1977, he was appointed as Archbishop of Munich and Freising in 1977. In 1981, Benedict XVI was asked to serve as Prefect of the Congregation for the Doctrine of the Faith and principal theological advisor to Pope John Paul II. His writings and interviews (such as those with Prof. Jrgen Habermas) on the relationship between faith and reason in contemporary culture remain foundational for the presentation of Christian faith as the Church seeks to provide reasons for the faith that is within us. (1 Peter 3:15)

Elected Pope on 19th April 2005, and following in the footsteps of his predecessor Pope Saint John Paul II, Benedict XVI initiated reforms within the Vatican Dicasteries which have been taken forward by Pope Francis.

Pope Emeritus Benedict published many scholarly writings. In his papal encyclicals and his many theological texts, Pope Benedict has provided insight into the central teachings of the Christian faith. His first papal encyclical Deus Caritas est (2005) offered a profound reflection on the nature of human and divine love and encouraged the sharing of God’s love with others through acts of charity. Spe salvi (2007) centred on the theme of Christian hope which is grounded upon faith in God. Caritas in veritate (2009) which emphasised the importance of Christian action in the world and integral human development. A prolific theological author, one of his more recent famous works is ‘Jesus of Nazareth’ which comprehensively provides a Gospel portrait of Jesus Christ.

For all who live in the Diocese of Down and Connor, Pope Benedict’s address at the Wednesday audience of 11th June 2008 on the figure of St. Columbanus was memorable. On that occasion he remarked: “The Irish Saint [Columbanus] truly incarnated these words in his own life. A man of great culture – he also wrote poetry in Latin and a grammar book – he proved rich in gifts of grace. He was a tireless builder of monasteries as well as an intransigent penitential preacher who spent every ounce of his energy on nurturing the Christian roots of Europe which was coming into existence. With his spiritual energy, with his faith, with his love for God and neighbour, he truly became one of the Fathers of Europe. He shows us even today the roots from which our Europe can be reborn.”

Pope Benedict’s visit to the United Kingdom in 2010 was historic. Many travelled across from Northern Ireland to Scotland and England to meet with Pope Benedict and celebrate the Beatification of Cardinal John Henry Newman.

In that same year 2010, Pope Emeritus Benedict issued a Pastoral Letter to the Church in Ireland, addressing the scandalous abuse of children by clergy. This provided an impetus to further strengthening the national safeguarding policies and procedures in Ireland to ensure that the church would be a safer place for children and adults at risk.

Together with parishioners and clergy of the Diocese of Down and Connor, I pray that the Lord will grant him eternal rest and welcome him into the eternal light and peace of God’s Heavenly kingdom.

Upon hearing of his death this morning, the following words from Pope Benedict’s Prayer for the Church of Ireland (2010) came to mind:

“God of our fathers, renew us in the faith which is our life and salvation, the hope which promises forgiveness and interior renewal, the charity which purifies and opens our hearts to love you, and in you, each of our brothers and sisters.” 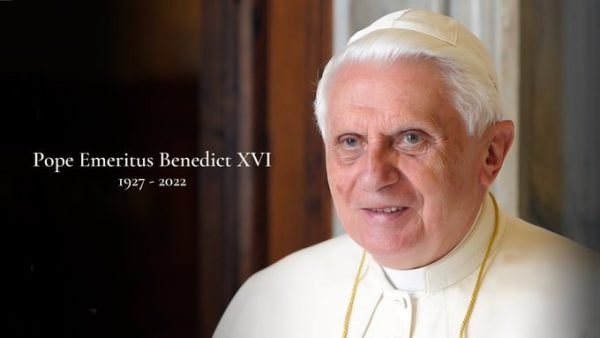